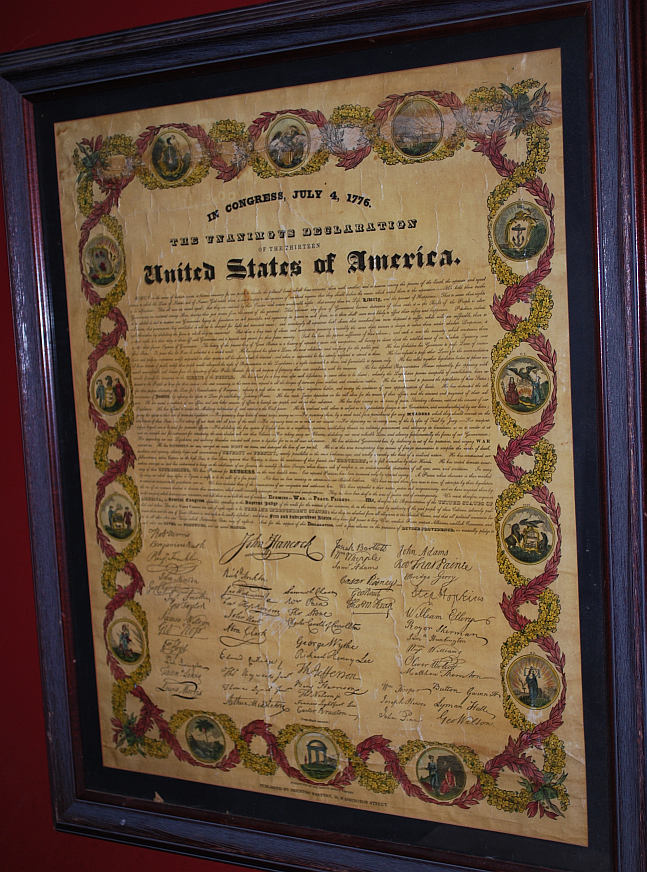 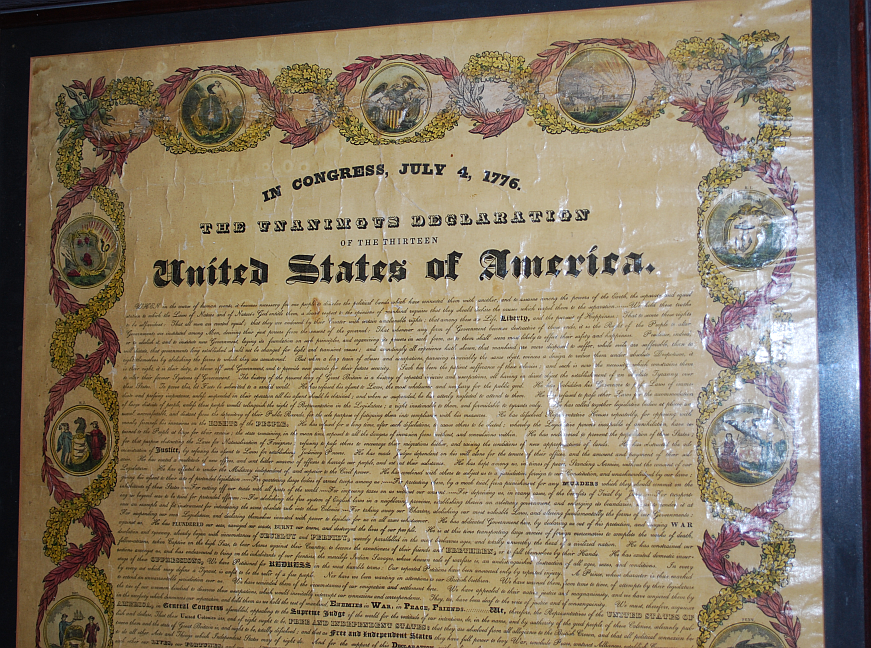 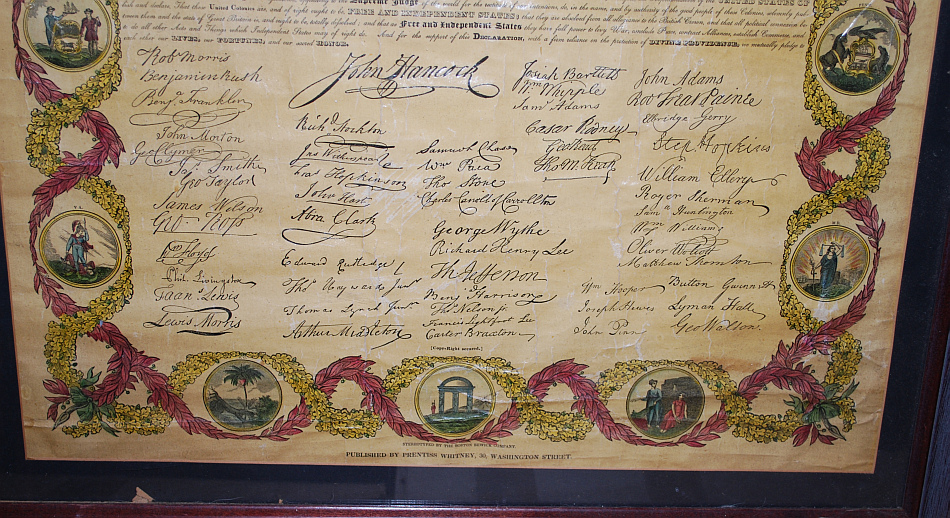 Paper on cloth backing, hand-colored, covered with a thin ancient layer of protective lacquer or varnish. No folds or tears. Short wrinkles on the untaut paper surface. Framed in glass. 1 pages. An imposing and beautiful broadside document! Prentiss Whitney of Boston, Massachusetts published this beautiful copy of the Declaration of Independence. It is approximately 26 tall by 21 wide. It has a four-line title printed in 4 different fonts. The text of the document is primarily in a handscript font, with some words enlarged and bolded in print type of four different fonts. Bottom section contains the signature replicas. The entire document is surrounded by two intertwined vines which encircle 13 state medallions (filled with symbolic vignettes) and an eagle and shield Federal medallion. Vines and medallions are fully hand-colored. At the very bottom is printed: 'STEREOTYPED BY THE BOSTON BEWICK COMPANY. PUBLISHED BY PRENTISS WHITNEY, 30, WASHINGTON STREET.' It is undated, but probably published in 1835. Prentiss Whitney (1787-1870) was an auctioneer, publisher of historic patriotic American prints, and an entrepreneurial investor at 30 Washington St. Boston in the 1830's and 1840's. His ancestor Rev. Peter Whitney of Northborough, Ma was one of the first to call for publishing the Declaration of Independence ('American independence vindicated. A sermon delivered September 12, 1776. At a lecture appointed for publishing the Declaration of Independence passed July 4, 1776. By the representatives of the United States of America in general congress assembled'). The Boston Bewick Company, no. 47 Court Street, Boston, was an association of authors, artists, printers, and bookbinders which was in existence from 1834-1838. It is mostly known for producing engravings, and for hiring Nathaniel Hawthorne as editor of the 'American Magazine of Useful and Entertaining Knowledge'. The Act to incorporate the Boston Bewick Company states it is founded for: 'the purpose of employing, improving, and extending the art of engraving, polytyping, embossing and printing, and carrying on the business thereof.' 1835 Boston Bewick ad: 'Engraving, Stereotyping, and Printing.: Boston Bewick Company. The Boston Bewick Company Respectfully Give Notice that They are Ready to Receive Orders for Engraving on Wood, Steel and Copper; and for Copper-plate, Letter Press and Xylographic Printing, in All Their Branches.' Prentiss Whitney's prints are excessively scarce. The only other known copy of Whitney's 'Declaration' is in the Albert H. Small Declaration of Independence Collection (University of Virginia). Whitney's other prints include an 1835 engraving titled 'Destruction of Tea in Boston Harbor in 1773' which was painted by artist George Loring Brown and engraved by Richard P. Mallory (Collection of the Boston Athenaeum). 'The Capture of H.B.M. Sloop of War Frolic, Capn. Whinyates, by the U.S. Sloop of War Wasp, Capn. Jab Jones, on the 18th of Oct. 1812' Aquatint, drawn and engraved by F. Kearny, from a sketch by Lieutenant Claxton of the Wasp (U.S. Naval Academy, Annapolis). 'The Battle at Bunker's Hill, or the Death of General Warren' Painted by John Trumbull and engraved by J. Norman.

The Life of Charles Carroll of Carrollton, 1737-1832, with His Correspondence and Public Papers. Volume One Only

By: The Isles Of Shoals Association

The Pack of Autolycus or Strange and Terrible News of Ghost, Apparitions, Monstrous Birhts, Showers of Wheat, Judgements of God, and Other Proigious and Fearful Happenings as Told in Broadside Ballads

By: Jennings, Harold B.

Masonic membership of signers of the Declaration of Independence

A Sermon Preached At Boston in America July 23 1812 the Day of the Public Fast...the Commonwealth of Massachusetts in Consequence of the Declaration of War Against Great Britain